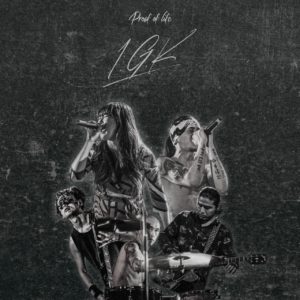 【 ABOUT “1.G.K” 】
‘From KYOTO to the WORLD’
-From Kyoto to the world- A 5-member ROCK BAND from Kyoto that is active under the concept.
【 HISTORY 】
■2005
・The Break Dance Team “Ichigeki”, to which KATSU belongs, won the runner-up in Battle Of The Year 2005.
・After returning to Japan from the tournament, in order to start BAND activity, which was another thing that KATSU wanted to do, he launched “1.G.K”, which was named after “Ichigeki”, and started activities.
■2010
・KATSU is the only Japanese to win FINALIST 20 in the LINKIN PARK 『the catalyst』 REMIX contest.
■2011
・”Belief” is a comprehensive art event that started as one of the places where artists, performers, dancers, and bandmen can share “music” and present in the same space, where genres that do not usually intersect with each other can be respected and stimulated. 1.G.K.
■2012
・Appeared in TED×KYOTO(2012/9/16) where researchers and artists from various fields, including Bill Clinton (former President of the United States and politicians), gave lectures.
■2015
・It becomes the system of the current members.
・1st E.P. “Re: Birth” CD released only at the venue. It will be distributed worldwide at a later date.
■2016
・TAKASAKI MUSIC FESTIVAL 2016 and advanced to the final stage. Performed with Tomoyasu Hotei.
・The comprehensive art event “Belief” has been restarted at Kyoto MUSE.
■2017
・1st Full Album “Circle” released nationwide. It will be distributed worldwide at a later date.
・The MV for “Gate Keeper” is introduced on Kansai TV “OTOEMON” monthly pickup.
・The MV for “The Most Beautiful Hands” has been selected as the “Music File” monthly pickup for ABC Mainichi Broadcasting.
・Album Release Event “Belief” was held at Shibuya club asia and Kyoto MUSE (SOLD OUT).
■2018
・1.G.K / KYOTO Belief Executive Committee / General Incorporated Association changes / Office Takatani jointly held “Belief FES 2018″ at Kyoto World Heritage Toji Temple. (Approximately 2000 visitors)
■2019
・”Belief FES 2019” is held at Toji, a World Heritage Site. (Approximately 4000 visitors) The CD of the 2nd full album “Belief” was released at the venue only on the same day. It will be distributed worldwide at a later date.
■2020
・Canceled “Belief FES 2020” to prevent the spread of the COVID-19.
・Audience-free LIVE “NOROSHI” will be held at Shiga U-STONE.
■2021
・”Belief FES 2021″ scheduled to be held in June has been postponed to August. Because of the state of emergency, it was postponed to November again.
・”Belief FES 2021″ will be held at KBS HALL in Kyoto on November 23 (tue / holiday).